This year started off with a very poignant journey to Peru, followed by being back in my homeland where the African skies meet my mystery, the mountains hold my curiosities and the oceans carry my tears of past and future. This land that continues to call me is rich with untold stories of hardship, bloodshed, racism, crime, magic, joy, glory, nature, entrepreneurship and music. It fills every pocket of my being when I am there. She, Mama Africa, calls me to keep searching far and wide for all the meaning that life has stored in her very fabric, in every detail of nature to which we often forget to pay attention.

This course enabled me to find my inner attacker—it helped me to carve out my inner fighter who is fierce, wild and can stand up and defend herself.

March has been truly wet and grey and it has been hard to maintain my usual zeal for life. I feel the sunshine of South Africa slowly fading away in the distance. The Nordic charms of late winter bring me into a new space of reflection, mixed with the tease of spring’s arrival. With all that being said, March has brought with it so much food for thought and new skills learned. 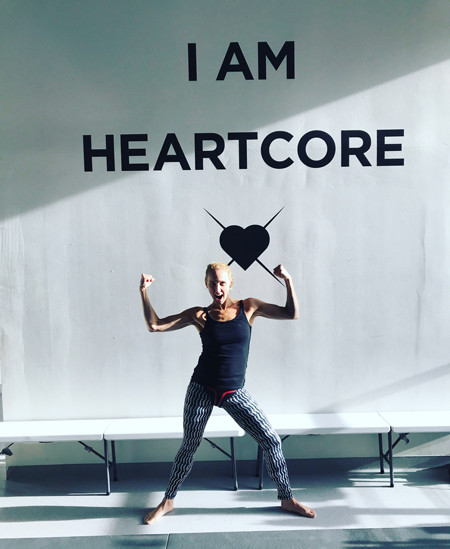 My beloved Thor bought me an intensive course for women in Krav Maga. Krav Maga is a military self-defense and fighting system developed for the Israeli Defence Forces and security forces. It’s derived from a combination of techniques sourced from boxing, wrestling, Aikido, Judo and Karate, along with realistic fight training. When it was first gifted to me, I had so much resistance to the idea of fighting because my natural state of being is more geared towards dance and flow. The idea of having to get in touch with my inner attacker felt so foreign and strange to me.

Little did I know that walking through the doors of Heartcore would change and enhance parts of my being that I didn’t even know existed. When I was in my 20’s, I was in an armed robbery and had a gun pointed to my head. This traumatic experience left me with much fear and anxiety that I have had to work through in later years. As a promiscuous teenager, finding her way into womanhood, I also experienced situations in which I was not always able to say no. Being in an open marriage for 10 years, where boundaries of practicing ‘no’ were not present, added to this struggle of not being able to stand in full power and authority.

I am ready, open and alert.

This course enabled me to find my inner attacker—it helped me to carve out my inner fighter who is fierce, wild and can stand up and defend herself. The practice of Krav Maga is so simple: you work with what you have—no fancy leg twists and karate chops. We practiced getting out of arm holds, being dragged, hair being pulled, body grabs from all sides, being strangled, headlocks, rape positions, and defending ourselves from being punched and working with knife attacks. The drills were physically engaging and left my body feeling strong and on fire. At first, I found it difficult to play the fighter and attacker, yet the more I practiced, something changed within my body, mind, and spirit—the same feeling I have when I meditate. The feeling of being truly in the zone, awake and aware of all that surrounds you, free of all distraction. 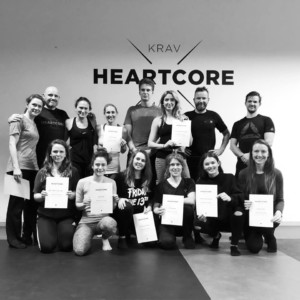 At the end of the course, three men attended and were instructed to attack us. They were all padded up and we got to practice what we had learned on them. I was so exhilarated that I was able to defend myself against them. This course has left me feeling so empowered. It’s given me a new edge to dealing with everyday life situations and boundaries. My inner fighter can stand up for herself and it has been equally relevant to other parts of me. As a woman, I feel this should be taught in schools to young women. These skills open up amazing doors and have helped me greatly with my fears, anxiety and self-esteem. I feel I can use this new approach to learning Danish, which up until now, has been very hard. Let’s now see what spring brings!

I am ready, open and alert.

Thank you to Joen, at Heartcore, for holding such a wonderful space. Thank you to the incredible women I met.  www.heartcorekravmaga.dk