Morocco, the Hammam and Mosques

Previous Next
Morocco, the Hammam and Mosques

As I leave Morocco, I am left with a big footprint of something remembered and profound insights gained. The Moroccan landscape reminds me of my African roots. The colour of the rich red soil is ladened with age, struggle, hard work, humanity from a time before organized religion and forgotten tales of the nomadic Berber People, who used to live so connected to the land.

Marrakesh is an explosion of all the senses. It reminds me of Aladdin without the Disney glamour and belly dancing. Small streets are knitted together with donkeys, butchers, mechanics, shops, barbers, motorbikes, food stalls, and snake charmers until it becomes a chaotic structure of a time before time. Morocco is a kaleidoscope of cultural meeting points. Smells of spices and mint tea, tastes of tagines, Mediterranean influences and French language spoken, mixed with daily prayer from the mosque, creates flavours of contrast, which blend together to make a recipe of stimulation, delight, reflection and wonder.

This trip to Morocco has been such an eye opener into the world of Islam and religion. I am left with the notion that it feels far more like a system of control and power than that of a religion of love and kindness.

It’s been so eye opening being back in an Islamic culture. When I was 24, I spent some time in Jordan working on a political theatre project. Coming to Morocco has reminded me of how lucky I am to be a free woman living the way I do. I had not anticipated the strong Islamic presence I would feel coming to Morocco. Something deep was stirred under my skin as I witnessed woman being treated like second-class citizens. Why does one only see the men sitting in cafés sipping their coffees while the women carry the heavy loads of fresh clover upon their shoulders or work in the land? Why can men hold hands, kiss and embrace each other while I get looks of anger and disgust from locals each time I touch or kiss Thor? Why women can’t be seen as equals, side by side with their husbands, is very difficult for me to understand.

I got to see a lot of Morocco: starting in Marrakesh, making our way to the Sahara desert, sleeping out with the Bedouins, then heading up to the high Atlas Mountains to climb the highest summit in North Africa, Mount Toubkal. This blog could be about all the wonderful triumphs of climbing the highest mountain peak, yet something else stayed with my from my first night in Morocco, which was more potent as it really opened my eyes to something I have never felt or seen before.

For our first night in Morocco, Thor arranged for us to stay with a Facebook acquaintance of his and have the opportunity of living with a local family. I was a little apprehensive, yet as we were greeted, the level of hospitality and warmth pushed my guards down. Sofia, a 25 year-old man, picked us up and brought us home to his sister and brothers. He shared with us his very moving story of being left as a baby by his Berber mother in the hands of a German missionary woman who was living in the Atlas Mountains where he learned German as his first language. He later learned to speak Arabic and has been a strong Christian all his life. He shared with us how he has been using the symbol of the fish in his public life to express his beliefs, as he is not actively allowed to practice his religion out of fear of being physically hurt. The symbolism of the fish itself has its origins in pre-Christian religious imagery. The Ichthys emblem was adopted by early Christians as a secret symbol used it to recognize churches and other believers because they were persecuted by the Roman Empire. When I asked him what gift he would like from Denmark he replied, ‘I would love a wooden cross for my wall and a cross for around my neck.’

We met two of his young close friends who had converted from Islam to Christianity. They also shared their stories of how they had been disowned by their families. This experience left me with such sorrow and so many questions. How can people not be allowed to practice their own religion? How can we still, in this present day, have to hide our true beliefs out of fear of persecution?

To add to this strong arrival, we had the opportunity to visit the local hammam (human wash house). Coming from the West, I have only had the luxury end one, where you are washed, lightly scrubbed and massaged in a beautiful location with gentle music accompanying your experience. 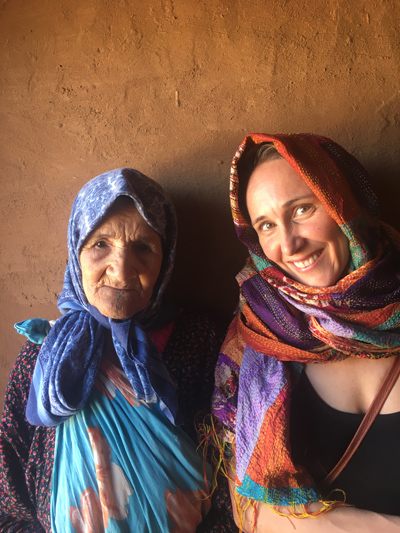 We walked around the corner to the local shop that sold everything from cornflakes to washing gear. We had to buy this special black soap and hand wash gloves. Thor was taken to the male side with his friend and I was taken to another entrance with the sister who could not speak a world of English. As my feet touched the wet slippery tiles upon entering, I soon realized I was the only Westerner amongst a room of naked Arabic women, teenagers and children. Their niqabs, burkas and scarfs were all put aside as they came together to wash and bath each other in a way I have never seen or experienced.

I can sometimes get a little over hygienic in these settings but something stripped me barer than bare. I was given buckets of hot water and soap. An elderly woman poured ladles of hot water over my dry naked body. She laid me on my stomach. I watched old hair, soap and shavings move past me as I lay naked on the floor. She took the resin-like amber, lathered my naked body in soap and started to scrub me down in the most rough, non-sexual, yet sensual way I have ever been washed. It almost felt like sandpaper cleansing away my sins. I was so surprised to see how intimate the woman were with each other: opening their vaginas and shaving, washing and scrubbing each other’s breasts, woman scrubbing down their children in the same rough manner. Coming from the West, this could be seen as abusive. Yet for them, it’s a weekly time of cleansing, talking and togetherness. Not a centimeter of my body was left untouched.

Cascades of hot water washed over me. I have never experienced so many different types of soaps used to clean my body. Numerous naked women were on their little prayer-like mats, washing and grooming each other in a way that felt so natural, honest and real. Then, after the 3 hours were done, they headed for the dressing room to start their routines of covering their most beautiful womanly parts of shoulders, arms, hair and skin, which sent a shiver of tears and fears through my beating heart. How can a religion create such a rule for women to cover up in the way they do? How can a religion not allow women to express themselves with freedom? How can a religion not want a woman to feel the beauty of the sun kissing her skin?

As I leave Morocco, I am left with a big footprint of something remembered and profound insights gained. The Moroccan landscape reminds me of my African roots. The colour of the rich red soil is ladened with age, struggle, hard work, humanity from a time before organised religion and forgotten tales of the nomadic Berber People, who used to live so connected to the land.

This trip to Morocco has been such an eye opener into the world of Islam and religion. Me writing this almost feels like a taboo subject, yet I feel it’s one that at present needs to be talked about. I am left with the notion that it feels far more like a system of control and power than that of a religion of love and kindness. The mosque calls people to pray 5 times a day, which in many ways I find beautiful as I feel in the West we have forgotten what it means to pray. The sound of the callings, which echo through the city, desert and mountains every day leave me with a chilling feeling of aggressive indoctrination and totalitarian manipulation.

My biggest prayer for humanity is that we can let go of these organised religions that condemn other religions. These wars we fight are all back to ‘you are right, I am wrong.’ How can any love and acceptance be met in this paradigm of thinking? I pray that we can come back to our true state of love for Mother Earth, love for our fellow human beings, and love for the children by teaching them to tread gently on planet earth. I pray we find our true creativity to find a way of acceptance, communication and compassion.